There are normally or in all 3 kinds of drilling mud used in the oil and gas drilling industry. Water based mud, oil based mud and also SBM. These 3 kinds of mud cover all the usages of drilling mud in all over the world. But no matter it is water based mud or oil based mud, after being used, they are not allowed to be disposed directly to anywhere, because no matter what material or chemicals added into the mud, they will cause damage to the environment. 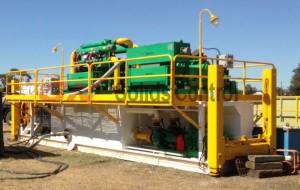 So the demand of the solids control and drilling waste management system is becoming more and more serious thing. How to manage the drilling waste or the drilling cuttings from the drilling mud? Where will the drilling mud go after being used? There are different answers to this question based on the drilling mud is a water based mud or oil based mud, mostly cases are like that, the water based mud is disposed after treated by the waste management system while the oil based mud will be transported to other projects for re-use. Why? It needs a calculation and a compare of the cost for transportation and the cost of mud itself. Water itself is of less cost and if the transportation cost is high, it is better to dispose the mud after being treated. But oil is expensive, so it is more economic to re-use it.

GN Solids Control is the number 1 waste management system provider in China, and its vertical cuttings dryer and centrifuge combination is both suitable for WBM and OBM also SBM.